Here we are, on the eve of the NLCS, in what is sure to be another classic series between the LA Dodgers and the Phightin' Phils. This is the 5th time in postseason history that the Phils and Dodgers will be meeting in the NLCS. Both teams have advanced to the World Series twice in the previous matchups. The Dodgers won the first two encounters in 1977 and 1978 and the Phillies won in 1983 and last year's World Championship year.


Tomorrow night we will see Clayton Kershaw vs. Cole Hamels at Dodger Stadium. Hamels needs to regain his 2008 postseason form and the Phillies' bats need to get hot and strike first and often. The Phightins' need to set the tone early and should the world once again, why we are the defending World Champions. The Phillies are riding high after their incredible series with the Rockies. For me, it was one of the best series I have ever seen. With the exception of Game 1 (I was in attendance), every game was decided by one run. The Phillies need to bring that energy to LA. Things are looking good for the Phightins', the bats are swing well but need to get better with runners in scoring position. We can not leave the bases loaded over and over again and expect to win another World Championship. Brad Lidge is looking like the same pitcher than closed out our first World Series win in 28 years. Also, it looks like our bullpen will get a little stronger with the hopeful return of Chan Ho Park and Joe Blanton has pitched well from the pen. We all know what happens when a team gets Great Pitching and Clutch Hitting in October, you win your first World Championship in 28 years.

I am confident that by Game 6 of the NLCS, we will be gearing up for another World Series in Philadelphia. I can hear it now, the sound of 45,000 Phillies Phaithful chanting as one, "Beat LA, Beat LA, Beat LA."
Posted by tamerg at 7:31 PM No comments:

Yesterday, I was a caller on the Billy and Cal Ripken Jr. show on XM MLB Radio. First, I want to say want an honor it was to get to speak to Hall of Famer Cal Ripken. The basis of my call was to talk about none other than the Phightins'. I wanted to hear their take on who they felt would be the starters for Game 3 and 4. I mentioned that with Blanton and Happ both throwing in game 2, though it was only one inning and one pitch respectively, did Charlie Manuel hurt us for Games 3 and 4. I mentioned that I thought it would be Perdo Martinez would start (this call was before Charlie Manuel announced that it would indeed be Perdo) but I was slightly concerned how Perdo's stiff neck would react to the 20 degree weather that is Coladoro (Cal found this comment to be funny and started laughing). I also mentioned that I thought by using Blanton and Happ in Game 2 and not using the true bullpen guys are you telling your relief pitchers that you have no confidence in them.

Both Ripkens agreed that the Phillies are still in good shape and that Pedro should be fine and that Phillies have alot of fire power in them with Jayson Werth and Raul Ibanez who both had over 30 home runs and not to mention two guys named Utley and Howard. Billy Ripken mention that he thinks the Brad Lidge would be fine and that he started pitching much better at the end of the season and that the time off was exactly what he needed. He also went on to say that come Game 4, he felt that Blanton and Happ would both be available to start because their appearance in Game 2 was no different than throwing a bullpen session.

Cal then jumped in and stated that the Phillies success does not rest on the bullpen or the starting pitching. He believed that it relied on the top of the lineup's performance. He said that when Jimmy Rollins and Shane Victorino get on base and "start running around" that Phillies would be untouchable.

Well hopefully tonight in what will be the a very cold night with snow possible, the Phightin Phils can turn up the heat and score run after run after run. Also, I truly feel that Pedro has some gas left in his arm and that he will show us all tonight why the Phillies signed him. Tonight is the most meaningful game in the 2009 season so far and I believe the Phils are going to come out swinging and put a hurting on the Rockies pitching staff. This is now a best of 3 series and the World Champions are going to show the world just how they won the World Series last year.

LET'S GO PHIGHTIN' PHILS!
Posted by tamerg at 8:15 AM No comments: 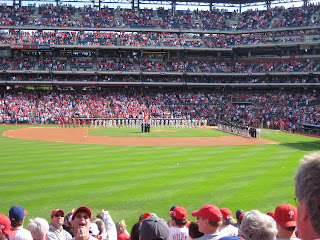 Wow....that is the easiest way to describe Cliff Lee's first ever postseason start. Cliff Lee's performance was amazing to watch. If Lee had some postseason jitters, you couldn't tell from the way he pitched. Lee pitched a complete game, giving out one run on six hits, five strikeouts and no walks. At one point, Lee retired 16 batters in a row, simply amazing. Lee was even one out away from a complete game shutout. When asked after the game, if at any point during the game he took a step out and soaked in the fact the he was pitching in the postseason for the first time, Lee said "It was in the ninth inning, right before I gave up that double in the gap, so I wish I wouldn't have done that," Lee said. "I wanted to give myself a chance to really absorb it and take it all in. Maybe it cost me a run, but we still won so that's the bottom line." In addition to his great pitching, Lee found got himself a hit and a stolen base. That stolen base was one of two historical Phillies moments that took place. Lee's stolen base was the first postseason stolen base by a Phillies pitcher in the history of the franchise. The crowd of 46,452 who witnessed Lee's gem, we all a part of the largest attendence in the short history of Citizen's Bank Park. The crowd was so taken by Lee, that "Let's Go Phillies" and in the bottom of the 9th "Yankees Suck" was replace by "Let's Go Lee." See for yourself.

In addition to Lee's pitching, the bats came alive, but not in a way Phans are accustom to. The Phillies score five runs and none were as a result of a home run, very unusual for the team let led the National League in home runs. But despite the lack of the long ball, the Phightin' Phils knocked around 12 hits and every player in the lineup got a hit.

Hopefully the Phillies have set the tone for the postseason. Great pitching, clutch hitting and speed on the base paths. Jimmy Rollins said it best after the game, "Finally, it's here," "We can finally let the wins actually count for something. You win, it's one less game you have to win to go to the next round. One down, 10 more to go." That's right Jimmy only 10 more to go. This will be another exciting October in Philadelphia thanks to the Phightin' Phils.

Road to a Repeat, Let's Go Phightin' Phils!
Posted by tamerg at 6:37 AM No comments:

The Road to a Repeat

The road to a repeat begins today at 2:37 PM. Cliff Lee has the ball and every Phan hopes that Lee overcomes the struggles he has been having as of late and pitches like the Cliff Lee that first arrived in Philadelphia. The Phillies have to come out strong and take game 1 today. The bats have to wake up and take it to the Rockies pitching staff. If the bats come out slugging, there is no one in the league that can stop the Phightin Phils. Going into the playoffs, our biggest concern still remains our bullpen. But, I think Lidge is going to get it together and so will the rest of the staff. The best scenario that could play out for the Phillies is if we go into the 9th up by 3 runs and Brad Lidge is brought in for the save. A save in Game 1 would probably do wonders for his psyche and would help carry us through the rest of the playoffs. It goes without saying, but our success relies on the bats waking up and the bullpen supporting our great starting pitchers. I am confident that the Phils with play up to their potential and we will not repeat 2007 against the Rockies. Let's Play Ball and Let's Go Phightin' Phils.
Posted by tamerg at 10:19 AM No comments: