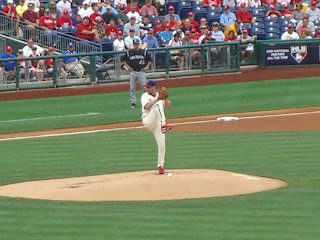 I was in attendance at today's home debut of the newly acquired 2008 Cy Young Award Winner, Cliff Lee. Lee did not disappoint the home crowd, giving up 1 run on 6 hits, allowing one walk and striking out 9 in 7 innings. Cliff Lee was amazing to watch in person.

In addition to Lee's debut, Jimmy Rollins provided some excitement in attempting to hit for the cycle. Sadly, he was just a home run short. Here is video of Rollins attempting to go for the cycle after hitting a triple, double single:


Finally, in the 9th, Brad Lidge was called upon to save the game for Lee and he did not disappoint. Here is Lidge entering from the bullpen and the final out of the game.

Final Out, Lidge Saves the game

Following a Phillies win, there is a new tradition and that is the Late, Great Harry Kalas singing High Hopes on Phanavision. I hope this is a tradition the keep for years to come.