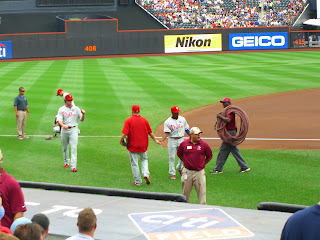 Yesterday, I had the opportunity to see Citi Field for the first time and what an experience it was. First, thanks to one of my great friends, Doran, I was able to sit 9 rows behind the Phillies dugout. That in an of itself makes for a great afternoon of baseball. But, little did we all know the afternoon that laid ahead. Did I mention these seats were incredible, again many thanks to Doran for getting these great seats and for the opportunity to see history. The game was exciting from the get go with the Phightins hitting 2 homers in the top of the first to take a 6-0 lead, the best part about it is Pedro Martinez batted before he threw his first pitch. Then in the bottom of the first, history was made when Angel Pagan hit the first ever inside the park home run in Citi Field history. But that was nothing compared to how this great game ended. I have seen many great moments in Phillies History, just check previous posts, but what I witnessed yesterday was something that has only happened once before in baseball history and never in the National League, an unassisted Triple Play to end the game. It was the bottom of the 9th and Brad Lidge was in the game and the Mets were threatening. 2 errors and a basehit and the Mets had cut the Phillies lead down to two. The Mets had 2 men on, Luis Castillo on 2nd and Daniel Murphy on 1st and Jeff Francoeur at bat. For some reason, the Mets decided on a double steal and Francoeur lined out to Eric Bruntlett who doubled up Castillo and tagged Murphy to end the game. I was in shock and estactic. If you haven't seen it yet, check it out now. What an amazing way to end the game. I am so thankful to have seen it in person.

On a side note, congratulations to Ryan Howard for becoming only the second Phillie in history to hit 30 home runs and bat in 100 R.B.I's in four straight seasons, only other Phillies to accomplish that feat is Chuck Klein. Congrats again to Ryan Howard.
Posted by tamerg at 7:04 PM